I am nearing the end of the full game. I plan on beating it early tomorrow morning! The review will be up soon after. In nearing the end of the game, a lot has become repetition. Now there have been some complaints about this, but I think it drives home the end of the story. As much as we want to be done with it, Talion wants to as well. We feel the anguish of a neverending battle. We understand and begin to look elsewhere for solutions, something to speed it up. For decades Talion fights against the legions of Sauron, a stalemate that never gives one way or another. Though people are annoyed and frustrated at this ending to the game, it only comes across to me as something to make us feel and experience the same thing the character does, just in a shorter amount of time.

That all being said, something really interesting did catch my eye today. With the new Punisher series out I thought it was ironic to see an orc with the name of ‘the Punisher.’ Not only did he don the name but even had the black and white face paint to accompany his wart-covered image. As most of my foes in this game though he did not end up on the right side of my sword. 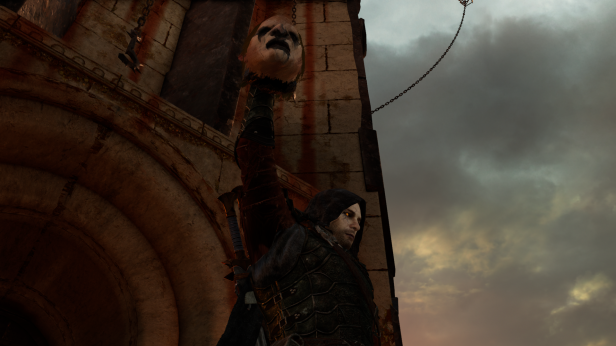